1938-1939   In Moscow ,particapates in the Ten-days Festival of Armenian Culture.

1956   During the days of the Second Ten-day Festival of Armenian Art and Literature in Moscow particpates in the exhibition of Armenian fine arts.

1965    After a thirty-year break the one-man show of Kotchar opens  in Fatherland, in Yerevan.

1970  Particpates in the exhibition , “Armenian Culture from Urartu up to the Present Day”, opened in Louvre.

1973   An one-man show opens in the Museum of Eastern Peoples in Moscow .

1974   Tretyakov gallery and the Russian Museum  obtain paintings and drawings.

1978   An one-man show of Kotchar’s graphic works open in Yerevan. 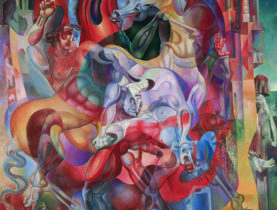