1980   An exhibition of Kotcha’s works open in the Artist’s House of Armenia.

1990   The ASSR Institute of Arts of the Academy of Sciences organizes scientific session dedicated to Kochar’s 90th birthday anniversary.

2002  Personal exhibition within the framework of  “Armenian Culture Week” in Aby Dhabi.

2010    Jubilee exhibition “I Rely on Time” dedicated to Kochar’s 110th birthday opens in the Artist’s House of Armenia.

In the State Pushkin Museum of Fine Arts in Moscow  opens exhibition “Two colors of the rainbow – two destinies reflection…” in which were included Kochar’s two works from series “Painting in Space”.

2012   Exhibition “ArtMonaco-Expo”, sponsored by the royal family of Monaco, the Painting in Space “First Sin” (1927) is awarded with main prize “Prix de l’excellence” in nomination “Baroque” as the work having considerable influence on development of Art of 20th century.

An exhibition called “The Diaspora of the Armenian Book 1512-2012”, opens at Special Collections of the University of Amsterdam Library in which were included Kochar’s “Voskan Erevantsi”  and the Painting in Space “Yerevan-Erebouni”.

2014  An exhibition called “Kochar. Challenging the Time” dedicated  to  artist’s  115 th  anniversary   opens at  Cafesjian Center for the Arts  in Yerevan.

2015   An exhibition called  “Ervand Kochar. Dialogue of Generations.” opens in  September 10  at  National Gallery of Armenia. 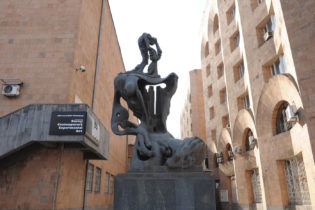